After working for years to create new jobs in Rhode Island, state labor officials have been faced with an unusual problem recently. In some sectors, employers are desperate to find help.

An example: Todd Blount, CEO of Fall River-based Blount Fine Foods Corp., which has a production facility in Warren, orchestrated an odd promotional campaign to attract new workers, something that his operation drastically needed to meet the demand for Blount’s products.

Needing to fill 30 positions at the Warren plant, Blount offered as a hiring bonus a year’s worth of free clam cakes and chowder.

“This is definitely the most unusual thing we have done,” Blount said.

The need for workers was evident in data compiled by the U.S. Bureau of Labor Statistics, which noted that there were a record 9.2 million job openings at the end of May. BLS records show job openings nationwide had been on an upward trajectory from 2011 to 2019, peaking at over 7 million in 2019, and then dropped precipitously to under 5 million in 2020 before reaching 9 million earlier this year.

AnnElizabeth Konkel, an economist at job search website Indeed.com, said that through the week ending June 18, 4.1% of job postings featured hiring incentives. That is more than double the 1.8% offering incentives a year earlier.

With the COVID-19 pandemic upending the labor market, more companies than just Blount Fine Foods were forced to be creative to lure candidates to fill positions.

Cole DeSanty, director of client development at Providence recruitment firm The Hire LLC, said that companies were bending over backward like never before to attract workers. DeSanty, who has worked in the recruiting business for 14 years, said some companies offered large signing bonuses upfront, remote work, schedule flexibility, free lunches, and transportation passes.

“I don’t think I have ever seen such an aggressive candidate market,” he said. “Candidates are dictating what is happening.”

Rhode Island has seen its trials and tribulations over the years, as it faced industrial challenges that shifted the sands under the feet of its workers.

The state’s unemployment rate had been on a steady decline when Gina M. Raimondo became governor in 2015, and that continued until the pandemic hit in the spring of 2020. The jobless rate dropped from 6.6% to 3.4% between January 2015 and February 2020, before skyrocketing to 18.1% two months later after the COVID-19 crisis struck.

At the same time, nonfarm jobs in the state grew by more than 20,000 over five years prior to the pandemic, to about 508,400 in February 2020, according to U.S. Bureau of Labor Statistics data. Those gains were quickly erased by the shutdowns ordered to slow the spread of the virus during the pandemic. As of December 2020, there were 461,900 nonfarm jobs in Rhode Island, the BLS said.

“That is something we should celebrate,” he said. “R.I. Commerce is important and has positioned the state to compete.”

But Tebaldi pointed to other data that indicates the state continues to be plagued by a problem that has lingered for years – a relatively stagnant gross state product, a measure of the state’s economic output.

With the departure of Raimondo, who became U.S. commerce secretary under President Joe Biden, Gov. Daniel J. McKee has stepped in to implement his own brand of economic development, one that he says is focused on the state’s small businesses.

McKee saw the labor shortage as a serious issue, convening a panel of experts in July to discuss workforce issues during his Rhode Island 2030: Community Conversations meetings held live weekly on Facebook.

The panel, including Commerce Secretary Stefan Pryor and Matthew Weldon, director of the R.I. Department of Labor and Training, said the state had seen a transition over time from an industrial industry to a digital and technology-based environment. The panel thought training and funding would be needed to support the growth of the state’s workforce in the burgeoning digital sector.

The panelists discussed the inability of employers to hire workers to meet demand, which they felt was a complex issue. They also felt that the transition the labor shortage presented was a unique opportunity for the state.

“It means exciting new opportunities,” said Nina Pande, executive director of Skills for Rhode Island’s Future, who noted that workers could reside in Rhode Island and work remotely for global companies. “What we have, and because Rhode Island is so small, is an amazing moment in time to figure out how to do this well.”

Pande said the state needs to look at digital technology across all industries in the state and provide the resources needed to support it. Her organization sees about 1,000 job seekers per week, she said.

Meanwhile, state officials also are prepping thousands of jobs that could be created by the emerging offshore wind sector. The Biden administration has set a target of establishing 30,000 megawatts of offshore wind energy by 2030, which the federal government estimates will trigger more than $12 billion per year in capital investments and create 44,000 new jobs directly in the offshore wind sector.

With several wind projects planned in waters off the Rhode Island coast, officials think many of those jobs will be created here.

Plans are underway at the Community College of Rhode Island to offer a program to provide safety certifications that will be required of offshore wind workers of the future. And there’s an education program created by the North Kingstown Chamber of Commerce as a career pathway initiative. So far, about 250 high school students have participated.

“It’s going to be a very bright future for a young person getting into this field,” said James Halley, North Kingstown Chamber ­chairman. 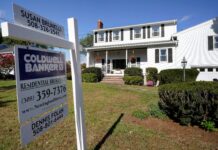 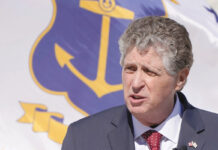 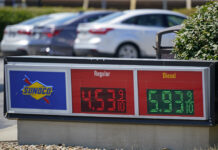 Breeze Airways to open permanent base at T.F. Green