Rhode Island’s transition to a “clean-energy” economy can’t happen without addressing the state’s largest and most stubborn source of greenhouse gas emissions: the transportation sector. So, it’s welcome news that Rhode Island is investing a significant portion of its $14.4 million from the Volkswagen settlement to start transitioning its fleet of public buses to zero-emission electric vehicles.

Under a plan announced by Gov. Gina M. Raimondo in May, the R.I. Public Transit Authority will use VW funds to put three leased electric buses on the road this fall in a pilot program, then purchase up to 20 electric buses to replace aging diesel buses in the coming years. Additional VW funds will go toward deploying a network of charging infrastructure to support the expansion of the electric-vehicle market.

Electrifying transit is key to reducing harmful greenhouse gas emissions, as called for under the Resilient Rhode Island Act, and to improving air quality and public health. Prioritizing the electrification of RIPTA buses is also a way to ensure that the benefits of electrification are distributed equitably, reaching low-income and environmental-justice communities that are disproportionately burdened by transportation-related air pollution.

While the millions of dollars in VW settlement money is a promising start, building a clean, modern, resilient and equitable network of transportation options will take much larger – and longer-term – investments. A number of policies could provide funds and market signals to accelerate and guide transportation investments; one such policy would be a regional cap-and-invest program. In Rhode Island and regionally, a cap-and-invest policy can reduce emissions while raising revenue for local reinvestment in transportation improvements to better serve residents and businesses.

The region already has a model that has proven the benefits of cap-and-invest policy over the last nine years. The Regional Greenhouse Gas Initiative, which holds power plants accountable for pollution, has brought significant economic, health and environmental benefits to Rhode Island and the region:

• Carbon dioxide emissions have fallen by 51 percent regionally since 2008, the year before RGGI began.

• From 2009 to 2014, reductions in harmful pollutants have saved Rhode Island between $62 million and $140 million in health costs from avoided asthma cases and other respiratory illnesses, adult mortality, fewer hospital visits and lost work days.

• Rhode Island’s $60 million in RGGI proceeds has been reinvested mostly in energy efficiency, which helps keep energy costs down for residents and businesses, and supports the development of the clean-energy industry.

A cap-and-invest program could bring significant, much-needed revenue to modernize Rhode Island’s transportation system. With a carbon price of $10 per ton, Rhode Island could generate $45 million a year through a program that caps emissions. Specific decisions on policy design and how to invest the funds should be informed by stakeholder input, particularly from impacted communities to ensure equitable distribution of program benefits. General priorities could include further electrifying the RIPTA fleet, increased transit investment, promoting electric vehicles and deploying public charging stations, and improving pedestrian and biking options.

Rhode Island can lead on transportation climate policy, but that doesn’t mean the state will be going it alone. Last fall, Rhode Island joined Massachusetts, Connecticut, New York, Delaware, Maryland, Vermont and the District of Columbia in committing to engage businesses and communities in conversations about developing a regional, market-based approach to reducing transportation emissions. These conversations are underway. But they must lead to action.

Erika Niedowski is policy advocate in the Providence office of Acadia Center, a clean-energy research and advocacy organization. 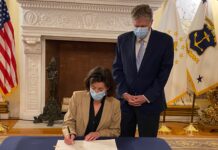