PROVIDENCE – The Rhode Island COVID-19 response will not be disrupted by the nomination of Gov. Gina M. Raimondo to serve as U.S. Commerce secretary, the state’s top health official said Friday afternoon.

Raimondo will leave mid-way through her second term if she is appointed to the Cabinet position. She was nominated on Friday to the federal post by President-Elect Joseph Biden.

“Our COVID response will not skip a beat,” she said. “Our teams have continued full-steam ahead.”

COVID-19 remains a deadly virus in the state and while the number of infections and hospitalizations dropped a bit on Thursday, and have decreased somewhat compared with four weeks ago, Alexander-Scott said the virus remains “incredibly dangerous.”

Four weeks ago, the state had a daily average of 66 new hospitalizations a day. This week it was 51.

Alexander-Scott again urged state residents to get tested weekly if they can. Asked by a reporter how her own experience with the infection had affected her, Alexander-Scott said she was thankful the testing and diagnosis allowed her to protect her family.

In an update on the vaccine distribution, Dr. Philip Chan, of the health department’s Division of Preparedness, Response, Infectious Disease and Emergency Medical Services, reported that the state had passed the 30,000 mark for doses administered, including first and second doses of the vaccine.

The state now has 1,791 people who have been fully vaccinated, meaning they’ve had the required two shots of the available vaccines.

Rhode Island remains in the initial stages of the first phase of vaccine distribution, which will involve giving the vaccines to about 200,000 people. Within two weeks, the state expects to start giving the shots to outpatient physicians and staff, including dentists, dermatologists and optometrists. The state expects to start reaching the largest group in phase one, the 79,000 people aged 75 or older, by February or March.

In the second phase, people with risk factors for COVID-19 other than their age or their living situation will begin to receive their inoculations, as will teachers. 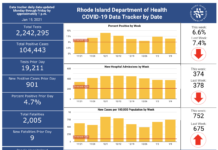 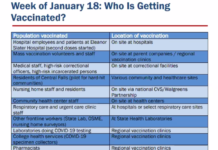 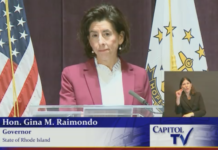