PROVIDENCE – Dr. Jack A. Elias will be stepping down in his role as dean of Brown University’s Warren Alpert Medical School and will transition to becoming the Ivy League university’s senior health adviser, Brown announced Thursday.

In his new role, Elias will work with Brown President Christina H. Paxson and Provost Richard M. Locke on realizing the upcoming integration of Care New England Medical System and Lifespan Corp. into a combined academic health system with Brown, the university said. He is expected to advise Paxson and Locke on coordinating medical education and research with clinical practice across the combined health system.

“I am very excited to play a part in helping to do for Rhode Island what academic health systems have done for Boston, Pittsburgh and other cities across the country,” Elias said in a statement.

Elias has served as the medical school’s dean since 2013 and Brown said Elias in 2015 formed the Brown Institute for Translational Science, which created numerous research teams within BITS as part of a major restructuring of research areas in the medical school. Additionally, Elias’ efforts and leadership helped Brown’s Division of Biology and Medicine raise more than $222 million through the BrownTogether fundraising campaign, Brown said. Research funding also increased with Elias at the helm of Warren Alpert Medical School, going from $37 million in the 2013 fiscal year to $95 million in the 2020 fiscal year, the university said.

“Through his drive and determination, he has fueled exceptional growth in research and teaching, achieved dramatic increases in grant awards, raised the national profile of the Warren Alpert Medical School, and expanded the impact of its physician-scientists and its graduates,” Paxson said in a statement.

Brown said Elias will still serve as dean of the medical school until a successor is named. A national search for the school’s new dean will commence in May. 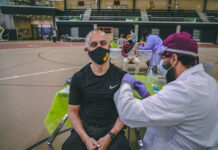