EAST PROVIDENCE – Gov. Daniel J. McKee kicked off his 2022 campaign for governor on Tuesday, emphasizing his small-business roots and work helping the state recover from the COVID-19 pandemic.

He made the announcement after touring Igus Inc., a global manufacturer of engineered plastics, such as plain bearings, spherical bearings, linear rails and carriages, cable carriers and continuous-flex cables. The company, which has a newly expanded 189,000 square foot facility in East Providence, employs 350 workers in Rhode Island, which ships 1,000 UPS packages per day, said Gerry Fournier, vice president of operations for Igus Inc.

McKee touted his vision for the next four years to grow jobs, lower costs for families, support small businesses and put money back in people’s pockets.

”Over the last year, we’ve delivered strong leadership in a time of crisis, and going forward, my message to Rhode Island is simple: I’m running for re-election to grow jobs, boost wages, grow our economy and put money back in your pockets,” McKee said. “I am running to create good-paying jobs, and support small businesses, to grow our economy, and fight for hardworking people and their families in all 39 cities and towns.”

The governor touted his accomplishments when making his announcement, citing the state leading the nation in vaccines administered, third in booster shots, and first in tests conducted.

“My message to Rhode Island is simple,” he said. “I’m running for governor to help create more opportunity for working people and their families.”

McKee, whose wife, Susan, was in attendance, said his campaign announcement was made at the plant to send a message about continuing to help businesses and foster Rhode Island’s economic future.

“[Igus] hired more than 100 employees during the pandemic,” he said, noting that the company will “be building an energy efficient facility in the future. We’re excited to work with Igus, and other businesses across the state.”

McKee sidestepped the question of whether embarking on an election campaign will distract him from his daily duties as governor.

“I think we will be able to manage just fine,” he said. “That’s why we are putting a campaign team together that is separate from our office. I will be able to govern every single day in the office as I have for the past year.”

McKee, the 70-year-old former mayor of Cumberland and lieutenant governor, said the state was “taking on water, ” with a struggling economy,  when he took office as the state’s 76th governor on March 2 after former Gov. Gina M. Raimondo departed to become the U.S. Commerce Secretary in President Joe Biden’s administration.

“We had one of the lowest vaccination rates in the country,” McKee said. “And our schools were a big question mark about getting kids back in the classrooms. Today we have momentum, and that is the reason I am running for governor.”

McKee said that Lt. Gov. Sabina Matos will be joining him on the ticket, and he is looking forward to debating the issues during the summer with the other field of candidates in the race.

DaSilva introduced the governor at the event, noting that he is endorsing McKee in the upcoming election.

“Gov. McKee took office not even a year ago,” he said. “He stepped in and led us through a tough moment for our state, with children struggling to learn, businesses struggling to stay open, and a slow-moving vaccine roll-out. But in a short period of time, Gov. McKee demonstrated strong leadership to put us on the right track and get our state moving again,”

Fournier, who led the group on a brief tour of the plant, said the company views McKee as “pro-business.”

Fournier said the company heard from the McKee camp last week about a potential visit to the plant. Management was happy to accommodate the governor, he said.

“While taking the tour he was very engaged,” said Fournier. “It was great having him here.”

The other Democrats in the race are Secretary of State Nellie Gorbea, ex-CVS Health executive Helena Foulkes and two 2018 gubernatorial candidates, community activist Dr. Luis Daniel Muñoz (who ran as an independent) and former R.I. Secretary of State Matt Brown. No Republicans have formally announced a run.

The primaries are Sept. 13, and the general election is Nov. 8.

(UPDATED with comment from McKee and Matos, details from announcement.) 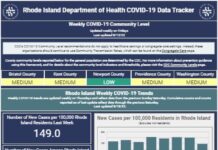 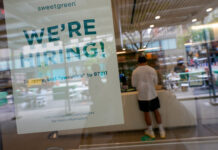 It's going to be a beautiful night at Aldrich Mansion. Tickets still available!