PROVIDENCE – A Florida-based maritime logistics company is the latest in the burgeoning offshore wind industry to set up offices in Providence’s Innovation & Design District.

Crowley Maritime Corp. on Thursday announced the opening of its New Energy division out of the Cambridge Innovation Center Providence’s coworking space within the Wexford Science & Technology building. The Rhode Island office will serve as the national hub for the company’s services to the offshore wind industry, which includes shoreside development and engineering, as well as maritime logistics and operations, according to a news release.

About a dozen existing company employees will start out of the Providence office, company spokeswoman Torey Vogel said.

Crowley has signed an initial lease with CIC for 30 days, though it plans to grow and expand its presence there over time, CIC spokeswoman Samantha Decker said.

Crowley joins 12 other wind-related companies that have already located offices within the building at 225 Dyer St., Decker said. Among them, wind project developer Orsted U.S. Offshore Wind in March 2020 opened an innovation hub there, in addition to its offices on Exchange Street. At that time, seven wind-related companies were already leasing space out of CIC, PBN reported.

“Crowley is committed to enabling the U.S. development of clean, sustainable energy through offshore wind solutions,” Ray Fitzgerald, the company’s chief operating officer, said in a statement. “Our extensive expertise in supply chain services and deep experience with maritime assets will help Rhode Island and the United States meet the growing demand for new energy.”

Crowley through its New England subsidiary recently unveiled plans to buy and serve as port operator at Salem Harbor Station, which will serve the Vineyard Wind project off the coast of Martha’s Vineyard. The company has not yet made the foray to ports in Providence or at Quonset in North Kingstown.

Gov. Daniel J. McKee, who attended a ribbon-cutting for the company Thursday morning, called Crowley a “key contributor” to the state economy.

“Crowley’s diverse expertise in the offshore wind sector and marine industry at large will be an invaluable asset as Rhode Island continues to lead the nation toward a clean, renewable energy future,” McKee said in a statement.

Crowley serves commercial and government sectors worldwide, reporting more than $2.5 billion in annual revenues and 6,300 employees around the world, including more U.S. mariners than any other company.

Nancy Lavin is a PBN staff writer. Email her at Lavin@PBN.com. 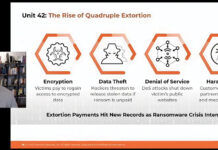 Whose responsibility is it to combat cyberthreats at your company?

Cyberattacks too costly to ignore 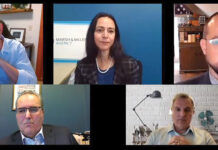