PROVIDENCE – Lt. Gov. Daniel J. McKee on Monday issued a rebuke of the state’s rollout of the COVID-19 vaccine, adding “speeding up vaccine distribution” will be his top priority when he takes over as governor.

“Like most Rhode Islanders, I am not satisfied with the current administration’s progress on vaccine distribution, especially as we see our neighbors in Connecticut ranked among the top in the nation,” said McKee in a statement. “I’ll be reaching out to Connecticut Gov. Ned Lamont, leaders at Harvard University, and my transition COVID-19 advisers to ensure Rhode Island is prepared to immediately expand its vaccine distribution capacity.”

McKee is set to succeed Gov. Gina M. Raimondo, once her nomination as United States secretary of commerce is confirmed by the U.S. Senate.

In recent weeks, McKee has taken a mostly cooperative stance with the Raimondo administration and state health officials on the vaccine rollout.

But on Monday Mike Trainor, spokesman for McKee, said that Rhode Island has been ranked last in the nation in national news reports for its vaccine rollout. Additionally, “We were given and “F” by Harvard, and Connecticut got an A,” he said. “So, clearly something is not happening in Rhode Island that is happening elsewhere.

“McKee is setting out this week to find out what exactly needs to be done, as he approaches being sworn in” as governor, added Trainor.

McKee said his transition team “has already successfully engaged all 39 municipalities in the state’s vaccination planning and enabled EMTs to administer vaccines alongside other medical professionals. Still, we know that Rhode Island has much more work to do to get shots in arms quickly and efficiently.”

According to the Centers for Disease Control and Prevention, Rhode Island has received 228,650 doses of vaccine. Per the R.I. Department of Health’s COVID tracker, the state has administered 148,335 doses, about 65% of the supply it has received.

The New York Times on Feb. 14 noted Rhode Island’s ranking near the bottom in the country for its share of the population that has received at least one vaccine shot. Per the article, 9.2% of the state’s population received a first dose, versus 13.3% in Connecticut and 11.9% in Massachusetts.

Harvard Kennedy School’s Belfer Center released a report card on Feb. 10 giving both Massachusetts and Rhode Island an “F” in handling their vaccination efforts. Harvard calculated per-capita metrics based on adult population, excluding those under 18 years of age.

Rhode Island health officials have said their approach thus far has differed from many other states. They have been more focused on getting as many of the people they consider the most vulnerable to the virus two doses of the vaccine, rather than getting at least one dose to as many people as possible.

According to the Johns Hopkins University coronavirus information center, Rhode Island ranked 26th on Feb. 15 among U.S. states and territories for the people fully vaccinated – that is, those who have received both required shots of the vaccine. With 4.43% vaccinated, Rhode Island was ranked just behind New Hampshire, which had 4.5%. Connecticut, Vermont and Maine have all vaccinated at least 5% of their population, according to the research. Massachusetts trails New England states, with 4.18% vaccinated fully.

Raimondo’s office did not immediately respond to a request for comment on McKee’s criticism. 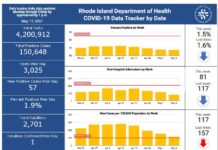 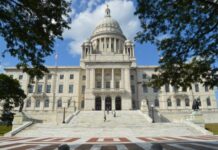 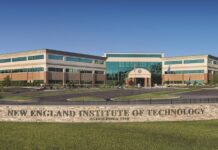 New England Tech to require students to be vaccinated before fall

New England Tech to require students to be vaccinated before fall