PROVIDENCE – Standing before a masked audience at the Statehouse, Gov. Daniel J. McKee on Tuesday struck a hopeful tone in promising to push for “a stronger, more stable, and fairer economy while prioritizing public health decisions that keep us all safe.”

In his first state-of-the-state address since he stepped in for former Gov. Gina M. Raimondo – who resigned mid-term last March to become U.S. secretary of commerce in President Joe Biden’s cabinet – McKee said Rhode Island “is resilient and full of opportunity.”

While Raimondo used her speech during last February’s state-of-the-state address to highlight her accomplishments, McKee offered budget proposals and promoted his achievements the past 10 months ahead of this year’s gubernatorial election.

“Tonight, I am here to lay out our administration’s plan to build a stronger tomorrow – to increase per capita income for individuals and families across our state,” said McKee. “This means increasing earning power for all Rhode Islanders. It means putting more money in your pocket and improving your quality of life for years to come. And the only way to do that is by building a stronger, more stable, and fairer economy while prioritizing public health decisions that keep us all safe.”

McKee said $1.1 billion in American Rescue Plan Act funds was delivered to the state for the purpose of improving the lives of Rhode Islanders. “In 2022, that is exactly what we are committed to do – to continue investing these dollars responsibly to improve your life and your family’s future,” he said.

The governor said he has engaged with thousands of Rhode Islanders, consulted with advisers and legislators through a process called Rhode Island 2030, which involved a series of community conversations.

“Together, we have discussed the important topics of housing, small business, climate change, children and youth services, supporting seniors, higher education and much more,” he said. “The outcome was a working document outlining dozens of priorities for Rhode Island’s next decade.”

McKee touched on his proposed fiscal 2023 budget, which is expected to be unveiled on Jan. 20, as well as plans for allocating the ARPA funding. The General Assembly approved $119 million of the ARPA money on Jan. 4, based on the governor’s proposal for addressing housing, child care and small-business needs.

“I will submit … a budget that’s fiscally responsible with no broad-based tax increases – but at the same time proposes long-term investments to grow our economy and support our people,” said McKee. “I’ll also submit a spending proposal for investing the remainder of the state’s American Rescue Plan funds to launch Rhode Island into the next decade with strength. This is a big moment for us.”

Some budget proposals will include $430 million for education facilities, kindergarten through higher education, a $250 million investment in the state’s housing stock, and $50 million in assistance for homeownership.

McKee said he will propose more funding to forgive student loan debt, especially for health care professionals, and $40 million to continue the Real Jobs Rhode Island program, “which has helped thousands of Rhode Islanders get back to work.”

He will also propose a “higher ed academy” that would enroll more than 1,000 Rhode Islanders during a three-year workforce-development program.

McKee said he expects on Wednesday to announce over 100 infrastructure projects valued at $2.1 billion paid for from federal infrastructure funds under the “Build Back Better” program. “This initiative will create safer roads, bridges and bike paths and will put many more tradesmen and women to work,” he said.

Reflecting on the past, McKee said that during the pandemic Rhode Island’s unemployment rate was as high as 17% and the state lost over 100,000 jobs.

“Our leisure and hospitality industries alone lost 37,000 jobs,” said McKee. “But for the first time in recent memory, our state didn’t suffer its usual fate of first in and last out of the economic downturn. During the first eight months of our administration, Rhode Island had the 7th-largest unemployment rate decline in the nation.”

He noted that while there are still pandemic workforce challenges, the number of jobs in the state “has increased significantly. Key sectors of our economy like construction and manufacturing are even above pre-pandemic job levels.”

“We’re No. 2 in the country for putting shots in arms. We are No. 1 in the nation for tests per capita,” he said. “Just two weeks ago, we did 175,000 tests, four times more per capita than Massachusetts.”

Prior to his state-of-the-state address, McKee said he would be including proposals to boost small businesses and $10 million for minority-owned businesses in his fiscal 2023 budget.

The small-business proposals would include forms of tax relief, expanding access to tax credits and creating the position of Taxpayer Steward. 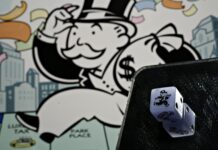