Rhode Island has been hit harder by the COVID-19 pandemic than most states, and the economic fallout has left the General Assembly with a massive $800 million shortfall in state revenues for fiscal 2020 and 2021. State revenues are unlikely to rebound any time soon and employment levels are not projected to return to pre-COVID-19 levels until 2023, according to the economic forecast adopted by state revenue estimators.

The Ocean State fortunately has received $1.25 billion in federal coronavirus relief funds – a relatively large allocation for Rhode Island’s population compared with other states. For example, Connecticut has a population nearly four times larger and received $1.4 billion in relief funds.

While this level of federal support is helpful, there are restrictions on spending these funds that create challenges and uncertainty. Rhode Island, and every other state, would benefit from more unrestricted federal funding given the magnitude of the crisis. Understandably, the prospect of additional federal funding or eased restrictions on funding appears to have forced Rhode Island’s budget makers to pump the breaks – at least for the time being – on the budget process. They can only delay so long, though. Rhode Island needs to devise a budget and invest for the long term regardless of the availability of more federal funding.

We need to be clear on the difference between one-time expenditures to deal with the pandemic and its aftermath, and our regular rate of spending. Although Rhode Island enacts a balanced budget each year, we also have had stubborn projected deficits, with future spending commitments exceeding our available revenues. As a result, it’s become the norm to face a large deficit each year, even in years of an expanding economy and increasing state revenues. We will need to use federal funds to fill budget gaps, but we also need to recognize that the federal funding is a one-time economic injection. We should not rely on it to expand our spending beyond our future ability to pay.

Policymakers should think beyond simply filling gaps in a budget.

Our first spending priority obviously needs to be responding to the public health emergency. Fortunately, nearly all of these expenditures will be covered by the federal government. Gov. Gina M. Raimondo’s administration has reported that about $650 million has been committed already to pay for response costs such as backup hospitals, personal protective equipment, medical supplies and testing.

Second, the legislature should do its best to maintain essential social services – health care, food, housing, income support and other social services – to support Rhode Islanders in need so that they can get back on their feet and back on the job. Some of the flexibility in federal funding should be used to avoid cuts in essential services – cuts that would just make the situation worse. In addition, policymakers should consider using one-time federal dollars for temporary grants for rental assistance, responding to food insecurity, and cash assistance, if appropriate.

Third, the legislature should protect and advance the state’s progress in becoming more economically competitive and productive. While Rhode Island had low unemployment before the crisis, the pandemic reminds us that our economy is too dependent on low-wage and seasonal jobs. We need to avoid the temptation to raise taxes on business, which will be counterproductive in the long run. Instead, we should consider using one-time federal funds for grants and other assistance to help those businesses hardest hit to survive – loans are not going to be enough. There is a lot of business destruction happening and we need to stop the bleeding.

Policymakers should think beyond simply filling gaps in a budget that was developed before the pandemic. We should reassess our priorities and pursue investments that support and accelerate the recovery and best position Rhode Island for a changing economy.

Crises often make room for bold initiatives and changes in government policy that were previously unattainable. We should consider using one-time federal funds or perhaps new state borrowing to take advantage of opportunities presented by the changing economic landscape. I urge our policymakers to find the will to make investments and streamline government to position Rhode Island to be stronger than we were before the pandemic.

Michael DiBiase is the CEO and president of the Rhode Island Public Expenditure Council. He previously served as the state’s director of the Department of Administration. 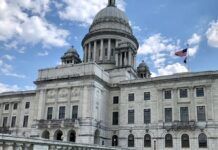 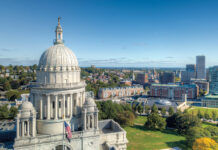 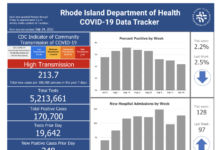 R.I. responds to lawsuit over lack of religious exemption in health...