Providence Business News
Home Subscriber Only Cover Story T.F. Green Airport’s growth plans thrown off course
Facebook
Twitter
Linkedin
Google+
Email
Print
In early October 2017, a crowd of state and federal officials descended on T.F. Green Airport in Warwick, celebrating the completion of a runway extension that promised more international flights and, eventually, new nonstop trips to the West Coast. Under a tent set up for the gathering not far from the end of Runway 5,… 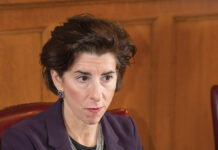