WESTERLY – As financial institutions shutter brick and mortar branches nationwide, The Washington Trust Co. is doing the opposite.

The bank on Wednesday announced plans to open a new, 2,300-square-foot-branch on Mendon Road in Cumberland, the company announced Wednesday. The standalone branch is slated to open in 2022, and will include traditional lobby services along with a drive-up lane, an after-hours deposit drop, safe deposit boxes and a walk-up ATM, the company stated.

The number of employees at the branch was not immediately available.

Earlier this year, the Westerly-based bank opened a new branch in East Greenwich. The Cumberland branch will be the 24th in the state, in addition to one in Mystic, Conn.

The Cumberland  Town Planning Board recently granted preliminary approval for the project.

Other regional banks, including Citizens Bank, Webster Bank and Berkshire Bank, in 2020 announced plans to close a number of brick-and-mortar locations across the region, including some in Rhode Island. 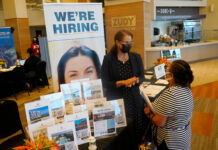