PROVIDENCE – Rhode Island has the debt capacity to borrow another $200 million this year, on top of the $387 million in bonds proposed in the original fiscal 2021 budget submitted by Gov. Gina M. Raimondo, according to General Treasurer Seth Magaziner.

Magaziner joined several economic and public officials Tuesday in calling for a large-scale state investment in areas such as housing and job training, to stabilize employment and reposition the state’s economy through the COVID-19 crisis.

In an online forum organized by the Rhode Island Public Expenditure Council and the Hassenfeld Institute for Public Leadership at Bryant University, Magaziner said the state cannot rely solely on federal funds to shore up its fiscal 2021 budget or make critical investments.

The state in a matter of months went from having record-low unemployment to record-breaking high-unemployment, he said, and unfortunately it hadn’t rebounded much by the end of May. Rhode Island still has among the nation’s highest unemployment rates, with about 100,000 state residents out of work.

That’s out of a total workforce of 550,000. The workforce fell from 63% of the adult population to 50% in a matter of a month. Consumer spending, January through June, has declined 23%.

“This is not a time for half-measures. This is not a time for timidity,” he said. “This is a time to be bold. The people of Rhode Island are counting on their elected leaders, the public servants of government, social service leaders, to come up with big ideas, big plans, to get the economy moving again and help people get back to work in a safe way.”
Bonding can provide an immediate infusion of cash, into the economy, he said. The state has a AA credit rating, which carries an interest rate of less than 1.7%.

There has been a “false perception” he said, that Rhode Island is highly indebted and doesn’t have the capacity to borrow as other states.

Rhode Island is middle of the pack, and has that capacity, he said.

Other options for funding a recovery in Rhode Island are limited.  It is unlikely that even with federal aid, through a new stimulus package, that the state could relaunch an economic recovery without its own bonding, he said.

“We are going to need to invest ourselves, as well.”

In 2017, the Public Finance Management Board established a state debt affordability study that recommended limits on how much the state should borrow.

“In our opinion, in the treasury, the state has the capacity to propose $587 million of new bonding, this year, while remaining at affordable borrowing levels.”

The governor had proposed $387 million in new debt in her original fiscal 2020 budget, he noted.

The R.I. General Assembly would need to approve any new bonding.

But Magaziner said that he believes another $200 million, on top of the $387 million proposed by Raimondo, could be borrowed through bonding, while staying within a sustainable amount of debt.

Other speakers, including R.I. Director of Administration Brett Smiley, said the administration is committed to realigning the state’s economy, to be less reliant on the lower-wage, service-oriented employment that has taken a disproportionate share of the job cuts.

The governor will be working on a revised fiscal 2021 budget in the next several weeks, Smiley said. The administration feels optimistic, he said, that there will be some federal stimulus that will help states resolve budget shortfalls.

The state has a history of being first-in, last-out of economic recessions, Smiley said.

“We are committed to breaking that cycle.” 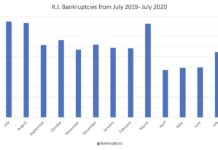 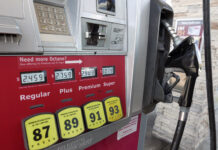 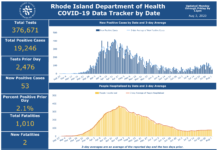