Lauren and Joe Romeiro, a wife-and-husband team from Exeter, were featured in the channel’s special, “Dawn of the Monster Mako,” in late July.

Lauren Romeiro, a marine scientist and photographer/cinematographer, and Joe Romeiro, a wildlife cinematographer/photographer who has served as executive director of 333 Rhode-Island based productions, are no strangers to Shark Week. They met while shooting for the annual series in 2017, and now describe themselves as “one of the few shark couples.”

Some of the largest makos ever seen have been off the coast of Rhode Island, the Romeiros said. But reports of a 14-foot long mako shark spotted off the coast of the Azores, an autonomous region about 1,000 miles west of the Portugal coast, brought them to the archipelago in search of a mako so massive that Joe Romeiro compared it to a Bigfoot sighting.

To spot the massive mako, the Romeiros broke out underwater camera technology they developed alongside a team of New England marine engineers, which allows them to stealthily film deep below the ocean’s surface.

The remote-controlled, tetherless cameras can travel to depths of up to 3,000 feet and remain on the ocean floor for up to eight hours.

With this technology, “we can spend longer there, be less evasive, and (be) silent to really help and observe what these animals are doing,” Joe said.

The documentary aired on July 24, but can still be streamed on the channel’s Discovery+ service.

The Romeiros’ work with sharks extends well beyond the “Monster Mako” special. Among his other projects, Joe Romeiro has filmed documentaries exposing illegal shark fishing and tournaments, and has taken numerous celebrities such as Will Smith and Rob Gronkowski tiger shark diving for other Shark Week features

Lauren Romeiro, a 2016 University of Rhode Island graduate, currently leads a five-year study on New England sharks out of the Romeiros’ Wakefield-based research vessel, and has also been featured on National Geographic, Lionsgate Pictures and ESPN.

Through their work, the Romeiros hope to change popular perception of sharks and inspire a push for better protection policies.

They have already seen improvements in the public view of sharks over the years, and last month, the shortfin mako shark, an endangered species, was granted new protections against fishing by the National Oceanic and Atmospheric Administration’s National Marine Fisheries Service.

“I think the more that people see them and fall in love with them, there will be more protection, and people out there who want to see them protected,” Joe said. 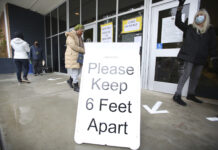