PROVIDENCE – The COVID-19 pandemic has put Rhode Island School of Design significantly in the red as the upcoming academic year draws near. Although Rosanne Somerson, the arts college’s president, told Providence Business News Tuesday that layoffs of faculty members are not a certainty, that option is on the table.

RISD is facing a minimum “best-case scenario” $50 million deficit that stretches back to the spring, when the campus had to close to in-person learning due to the coronavirus crisis, Somerson wrote Monday to faculty and staff. For perspective, Somerson said the deficit RISD faces now is 10 times the amount the school faced when the Great Recession hit a decade ago.

However, RISD’s full-time faculty union, according to Somerson’s, rejected a proposal from RISD’s administration on June 26 that included a combination of one-time progressive salary reductions, a temporary suspension of retirement contributions and other changes.

“We were disappointed to hear that,” Somerson wrote on the union’s rejection, “as they were asked to do only what every employee at RISD was asked to do – no more and no less – which meant the lowest earners were exempt from the salary reductions and the remaining employees would receive reductions in a tiered manner based on their salary to get us through this coming year.”

Somerson told PBN on Tuesday that the college’s plan is to “avoid unnecessary layoffs,” but it requires help from all employees across the institution. She said RISD had a number of collective bargaining units that the administration has been working with to “try and come to an equitable plan,” and hopes to get cooperation from all employees to mitigate the amount of people possibly being impacted by layoffs.

If not, “it will mean layoffs across the institution,” Somerson said. But, RISD is in the process of setting up another meeting with the full-time faculty union, Somerson said. She noted that the union “refused to participate” in the last meeting.

Jonathan Highfield, a literary arts and studies professor and full-time faculty union head at RISD, did not immediately respond to requests for comment.

RISD hopes to have the matter resolved by July 30 because the college will have a better sense of enrollment by then, Somerson said.

RISD, which plans to reopen its campus in the fall, is also facing challenges beyond its control. Among them are international travel restrictions and students not being able to get visas in order to attend the college.

Somerson estimates that RISD will face a 13% drop in enrollment next year because of international students not being able to attend. Somerson deems it a best-case scenario for RISD considering other colleges around the U.S., she said, are looking at enrollment reductions of about 25% next academic year. Somerson hopes RISD doesn’t see a similar 25% drop, but is not ruling out that possibility.

“We just don’t know because it’s a moving target,” Somerson said. “You can see what has happened … in the last three weeks that areas of the country that may not [allow] travel into their states. There are a number of unknown factors. That’s the reality of all higher education at this point.” 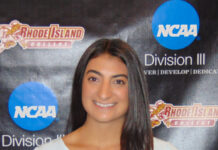 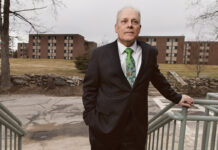