PROVIDENCE – The Ocean State’s economy has turned into a mixed picture with several aspects of its economy improving while others appear to be slipping from levels they recently attained, University of Rhode Island economist Leonard Lardaro said in his monthly Current Conditions Index report for July.

“For now, we’ll have to settle for what we can get, hoping things improve as the year progresses,” wrote Lardaro in his report that was released on Monday morning. “This almost makes one wish for the ‘good old days’ when slowing economic activity was recession induced and not the result of a forced stop.”

In July, Rhode Island had a CCI value of 25, a 50-point decrease year over year. The state’s CCI remained unchanged from one month prior. A value above 50 indicates economic expansion while a value below 50 represents contraction.

Three of the 12 CCI indicators improved in July compared to this same time last year, including retail sales, the manufacturing wage and the state’s labor force, which is the indicator’s first improvement since April.

“Their most recent several-month changes appear to be pointing toward strengthening. That’s good news,” said Lardaro. “The bad news is that several of these might ultimately be revised lower with the new labor market data in February or lose their current momentum if the federal government allows the current stalling of national growth to continue.”

Although Rhode Island’s economy has moved beyond what will prove to be its absolute bottom as schools return, Lardaro said the lingering after effects of the state never adapting its economy to the realities of functioning as a post-manufacturing economy will cause the eventual recovery to be “more limited in scope.”

“Month-over-month changes, if sustained, will eventually determine how well we do in terms of yearly comparisons,” said Lardaro.

Lardaro also said he hopes that August’s CCI moves above 50 and remain there for some time to signal the beginning of the state’s move out of the pandemic-induced hardship it has faced. 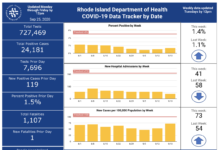 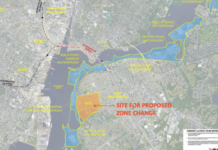