As state guidances restrict social gatherings be limited to 15 or less due to the current health crisis, PVDFest organizers announced on Thursday an alternative to replace the in-person art festival for a crowd-free way to explore Downtown and support the local economy.

Instead of hundreds of couples partaking in bachata dancing or local food trucks lining Kennedy Plaza, PVDFest launched their first-ever virtual scavenger hunt where participants will have two weeks to visit 15 different locations and complete various tasks, from Aug. 3 to Aug. 17, snap an image or video that shows them at the specific location and share it on social media. To be counted, participants will have to use the hashtag #PVDFestHunt and tag @PVDFest.

The exact locations are set to be announced on Aug. 3, and each location would have been on the PVDFest footprint in 2020, according to Katherine Hypolite, director of communications for the city’s Department of Planning and Development.

Downtown Providence has been hit significantly hard throughout the pandemic as office personnel have continued to work from home, travel has been restricted and events have been canceled. To entice locals and visitors to participate in the social media-driven scavenger hunt, a slew of prizes donated by community partners boast opportunities such as overnight hotel stays to day trips to staple city attractions.

According to the announcement, there will be three winners in total, but Hypolite said if any ties needed to be broken, then they will select the winners based on how fast they complete the hunt.

The Gold Prize includes a $250 Visa gift card, a two-night hotel stay at Hotel Providence including a complimentary in-room amenity, a four-guest private PVDFest public art walking tour, four tickets to the Roger Williams Park Zoo, a customized arts experience for two from FireWorks and a bag of PVDFest items, according to the announcement.

“While we can’t all be together to celebrate, we can still capture its spirit through this event,” said President and CEO of the Providence Warwick Convention & Visitors Bureau Kristen Adamo, calling it a way to support local businesses and arts organizations.

The arts festival was previously postponed indefinitely in April, but FireWorks, the festival’s founding partner, has looked to preserve the celebration of the city’s culture this summer through the installations of three new public artworks. The three include “Head in the Clouds, Feet on the Ground,” by artist Jerold Ehrlich at the corner of Dorrance and Washington Streets by City Hall; “Three Sisters” by artists Allison Newsome and Deborah Spears Moorehad located at on Westminster Street at Empire Plaza; and “Dream Weave” by artist Karin Giusti at the Civic Center Garage on Washington Street.

“PVDFest partners have a collective commitment to arts and culture programming that astonishes, expands viewpoints and builds community, said Executive Director Kathleen Pletcher of FirstWorks, which is the festival’s founding partner. “As we all explore new ways of creating and connecting this summer we’re excited to keep in the PVDFest spirit and celebrate all that makes our city vibrant.” 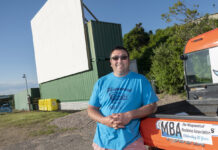 Blast from past a sellout 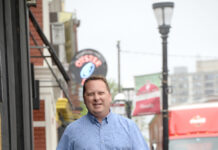 Dining Out: Signs of success in gloomy time