New York City native Manya Rubinstein is CEO of a Rhode Island distillery, leading a like-minded team at Industrious Spirit Co. and creating sustainably sourced vodka, gins and bourbons. It all happens in a city where Rubinstein has found her groove and set roots.

Originally, Rubinstein suspected publishing was her calling. After graduating from Brown University in 2001 with a bachelor’s degree in comparative literature, she landed a job at the magazine Vanity Fair in New York City, her hometown.

But something back in Rhode Island kept tugging at her.

That tugging actually started in her senior year at Brown, when she acquired a car and began venturing off campus more frequently, hanging out on the west side of Providence.

There, she found kinship in the tight-knit, creative community she discovered – artisans of all kinds working and sharing ideas around metals, glass and foods. Once she graduated and left the state, though, “I was missing this amazing energy that I just started getting to know here,” Rubinstein said.

She missed that energy to such an extent that she began coming back to Rhode Island on weekends.

“It was its smallness,” she said of the Ocean State. “If you wanted to talk to someone about doing something, you can because we all know each other. It doesn’t take too many steps to accomplish your goals. I like this sense of possibility and this collaborative nature.”

Rubinstein earned two more master’s degrees, in marketing and media management, and communications, and served in other professional roles. She even worked at Google LLC in Cambridge, Mass., from 2007-2010 as an account strategist and then as a senior analytical lead, but the effects of the creative network she discovered in Providence stuck with her.

‘Here, there is a sense of possibility and people who want to make things together.’
MANYA RUBINSTEIN, Industrious Spirit Co. CEO

Rubinstein became active in Providence’s Steel Yard industrial artists’ and makers’ community, which offers courses and residencies for artists in mediums such as ceramics and metals. She served on its board from 2014-2019.

“They had these amazing large-scale art events,” said Rubinstein, a mother of two. “It was a very collaborative community that I didn’t always find in other cities. Here, there is a sense of possibility and people who want to make things together.”

Through this creative Providence community, Rubinstein met Dan Neff, a ceramicist and welder with a passion for fermentation who had also worked in food service. He wanted to open a distillery.

Rubinstein had been restarting some consulting work when Neff shared his vision with her. “Dan and I started working together and I became intrigued,” she said. Now partners, the two found their chief financial officer Doug Randall, a Columbia Business School classmate of Rubinstein’s, and they started hatching plans for Industrious Spirit.

Rubinstein especially loved the idea of a distillery as a gathering place. The process of creating sustainable spirits and honoring the creative people who previously inhabited the former Providence Steel and Iron Co. complex where Industrious Spirit is located – it had been artists’ studios – took the artisanal theme full circle.

“We never took a shortcut. We figured that if we are going to go through the trouble of doing this, we are going to do it right,” she said. “We are still like that.” With the art of whisky-making taking about two years, the trio is accustomed to being patient for perfection.

For example, Industrious Spirit tracks the source of the grains in its products and how they are grown, opting to work with small farmers that abide by regenerative farming practices, she said. Rubinstein sees Industrious Spirit’s reuse of spent grains – a distilling byproduct – as livestock feed as part of a bigger, beautiful way to be industrious and reduce waste as well.

But Rubinstein faced adversity right at the business’s launch in 2020.

Though the COVID-19 pandemic put the kibosh on Industrious Spirit’s opening party, which had been planned with care and detail, the company made a name for itself switching to hand-sanitizer production, which it distributed to the city. Using a byproduct of its Structural Vodka, it handed out bottles of the sanitizer through the window of its historic location on Sims Avenue, netting positive publicity and making its name known.

Looking ahead, with summer on the horizon, Industrious Spirit’s outdoor seating and its music and food collaborations are a big focus now, said Rubinstein, a new way for people to experience the brand.

“We have a blast with it; we love flavor,” she said. 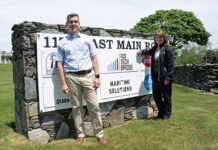 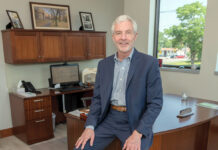 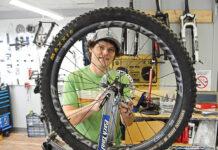