PROVIDENCE – Rhode Island has the 12th-lowest vaccine hesitancy of all states and Washington, D.C., according to data from the U.S. Department of Health and Human Services’ Office of the Assistant Secretary for Planning and Evaluation.

Rhode Island has an estimated vaccine hesitancy rate of 13%, tied with New York and Delaware, according to national survey data collected in March.

The share of individuals estimated to be strongly hesitant in Rhode Island is 3%, tied for lowest in the nation.

Massachusetts and Vermont ranked as having the lowest estimated vaccine hesitancy in the nation at 7% each; both have an estimated strongly hesitant rate of 3%.

Kent County, with an estimated hesitancy rate of 12.7%, was also higher than any Massachusetts or Connecticut county. The share of estimated strongly hesitant individuals in the county was 3.3%.

The highest hesitancy rates in Connecticut and Massachusetts counties were 12.2% in Windham County, Conn. and 8.7% in Bristol County, Mass., respectively.

Of all states, Wyoming was found to have the highest estimated vaccine hesitancy rate at 31%, followed by North Dakota at 29%.

The information was released on April 6. The full report, including an interactive map of vaccine hesitancy by county, may be found online. 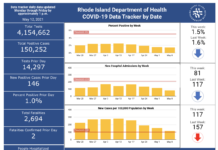